This was our first get together since the lockdown in March (apart from the occasional Zoom meetings). The day was overcast with a touch of damp in the air but, nevertheless, nine members and a guest duly met up at Lullingstone Castle in Kent. (Saturday, 15th August).
Due to Covid 19, the Castle was not open to the public but the beautiful World Garden was. Just as a bit of background, the Castle is set in 120 acres of the Kent countryside and is one of England’s oldest family estates, dating back to Domesday times.

The World Garden of Plants, to give it its full name, is the brainchild of Tom Hart Dyke. His aim is “to show where the plants we grow today actually originate from”. The garden is divided up into regions starting with the UK and Ireland, Mainland Europe, Asia, Australasia, Africa, North America, Mexico and South America and contains 8,000 plant species, cultivars and hybrids which are planted in their respective countries of origin. A beautiful Jersey Tiger Moth made an appearance and Ian was able to take a wonderful photo. In case you are wondering, the Moth has landed on a giant model globe of the world, just off the coast of Africa, right in the Atlantic Ocean!!

After our picnics it was time to move on to the Roman Villa for those who had booked tickets. This is run by English Heritage and is an outstanding example of a Roman villa-house that once lay at the heart of a large estate. It was built around AD 100 and was occupied for more than 300 years by a succession of rich owners. Over the years the Villa was expanded to include a bath suite, underfloor heating and, eventually, a luxurious dining room with fine mosaics.

It was a very interesting and enjoyable day, with the sun making a late appearance. Unfortunately no wine was imbibed in the making of this outing!!! 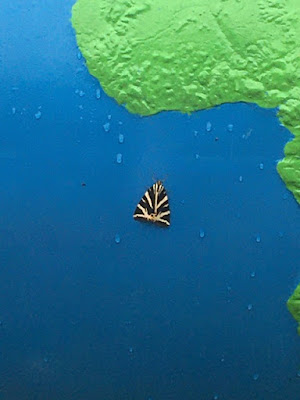 Email ThisBlogThis!Share to TwitterShare to FacebookShare to Pinterest
Labels: Aug 2020

TBC – Depending on Covid 19 Restrictions