For our March meeting, 18 members and 1 guest gathered at the Royal British Legion, Limpsfield for a Skittles Evening. Val randomly organised players into 5 teams, namely Vincent, Sebastian, Arnold, Bibiana, and Augustine. (Can you guess what these names have in common?).

We had time for 5 rounds, with a hot tasty meal served “at half-time”. Some analysis by Graham H showed that the best overall performance was in the first round, and scores dropped a bit after that, especially after food and drinks. However, in the words of the PM, we are confident that “there is no direct correlation” between alcohol consumption and skittle performance.

All who participated were winners. However, there had to be a winning team, namely Team Bibiana (Graham H, Maggie, Geoff, and Chris) with the top score of 114. The team coming fifth also won a prize, namely a lemon each. The player with the highest individual cumulative score was Graham H with 35. As usual, the evening was enjoyed by all.

Many thanks to Pete and Suze for organising the event, to Graham H and Denise for scoring, to the picker-uppers, and to Graham and Janet B for providing the transport.

Our next meeting on the 2nd April is a Quiz Night at the Station Hotel.

Our club is an informal one, which enjoys wine, food, and good company. There is a members’ annual fee of only £7 each, and a very low charge for events to cover costs. Village residents are encouraged to call Francis if they are interested in sampling a club event, or would like to learn more about the club. 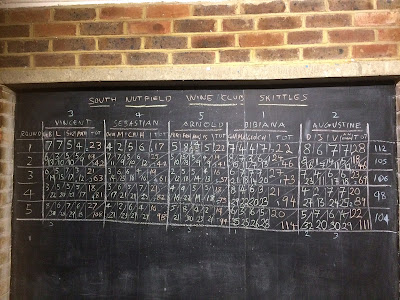 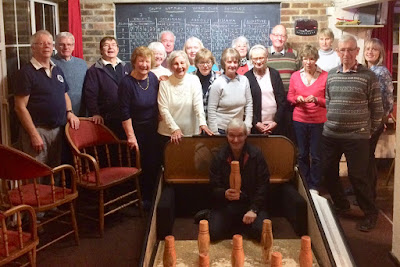 Posted by Kent Sandiford at 05:12 No comments: