On 5th July, twenty-two members of the Nutfield Wine Club enjoyed the club’s summer party at Val and Ian’s home and garden. The weather was pleasant and importantly dry. Members thoroughly enjoyed strolling around the garden, chatting and catching up. Ian had kindly put out some games, but these were ignored as members were enjoying talking too much.

Val and Ian were wonderful hosts and provided a range of food and Pimms, supplemented by members’ wine and food contributions. Thanks also to Val L and Janet for organising the event, to Mary and Derek for the excellent raffle, Graham B for providing some transport, and to members for their contributions.

Quote of the evening: “I don’t think that I could have a relationship with a fish”.

We next meet for an excursion on Saturday 20th August, which is likely to be a visit to the The Surrey Rural Life Living Museum, Farnham, and a pub nearby. Please contact Janet (822333) if you would like further details. Members will receive an email with details in the preceding week.
Posted by Kent Sandiford at 06:53 No comments:

Email ThisBlogThis!Share to TwitterShare to FacebookShare to Pinterest
Labels: July 2022

Traditionally, the Tipplers’ Stroll has involved drinks and nibbles at 2 or 3 members’ homes & gardens, and strolling between them. This year, Graham and Caroline very kindly offered to host the entire event in their lovely garden. About 22 members took advantage of their very generous offer, including our life member, Isobel, and another long-term member Pam. It was lovely to see both of them this time.

Our hosts had organised optional games, including croquet and a version of mini golf. Members brought food and drink contributions to supplement the wine and BBQ provided by Graham and Caroline. Members enjoyed catching up, together with the refreshments, in our hosts’ garden. Fortunately the weather stayed dry, although it wasn’t quite warm enough for swimming.

Many thanks to Graham and Caroline, the contributors, and those who provided transport. We are already looking forward to the Tipplers’ Stroll next year.

Our next meeting is the Summer Party at Val and Ian’s on 5th July. Please contact Janet (822333) for further details.
Posted by Kent Sandiford at 02:19 No comments:

Email ThisBlogThis!Share to TwitterShare to FacebookShare to Pinterest
Labels: Jun 2022

The Wine Club’s May outing was a Spring Walk around the Bluebell Wood, Outwood and eight members and one guest met up at the Windmill car park and duly followed a trail kindly signposted by the The National Trust.
Due to the warm weather we had experienced during April, the bluebells were just past their best but swathes of blue were still visible among the trees and their beautiful scent still detectable.
It was a warm and very enjoyable scenic stroll followed by convivial refreshment at The Bell, where walkers joined non-walkers to round off a very sociable evening.
Posted by Kent Sandiford at 02:17 No comments:

Email ThisBlogThis!Share to TwitterShare to FacebookShare to Pinterest
Labels: May 2022

Our April Meeting was ‘Quiz Night’. We arranged ourselves into 3 teams and then each team was handed a set of questions by our Question Master, Janet. There was a Picture Round, a Sweetie Quiz, a Pound Shillings and Pence Round, a Yes/No Quiz and a Number Round.

After more brain-racking (and guessing), the team with the highest score of 129, consisting of Caroline, Graham H, Kent and Derek, were duly rewarded with bottles of wine.

A big thank you to Mary for a grand job organising the raffle, which had an Easter theme.
Posted by Kent Sandiford at 02:14 No comments:

Email ThisBlogThis!Share to TwitterShare to FacebookShare to Pinterest
Labels: Apr 2022

We met on Tuesday 1st March for the popular Skittles Evening with Supper, at the Royal British Legion, Limpsfield. 21 members arrived to compare their skittle skills.
Names were picked randomly and 5 teams were quickly organised, namely: Solomon, Rehoboam, Balthazar, Salmanazar, and Melchior (wine aficionados will recognise that these are bottle sizes). After 4 rounds, Solomon and Melchior were tied on 90 points, closely followed by Rehoboam, so a playoff was required.
That was very close too, and the two teams were only separated by a point. The eventual winner was Melchior (Ian, Jane, Kent, and Graham H & Caroline). The players with the highest individual cumulative score were Janet and Kent, who tied on 26. The player with the highest score in a round was Pam with 9, which just goes to show that age is no barrier. Graham B also won a prize for propping up the scoreboard.

Many thanks go to the British Legion, for a warming and plentiful supper, Janet for organising the evening, Graham and Caroline who scored very well, Val L who organised the teams and the prizes, and Graham B for some of the transportation on a rather wet and windy night. 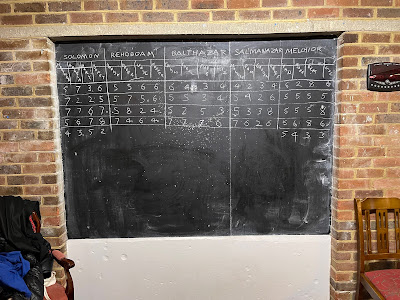 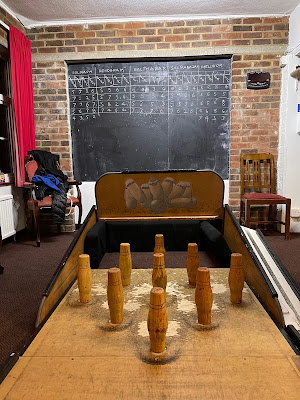 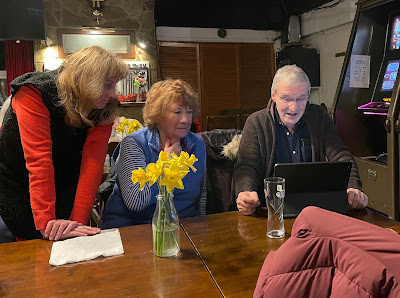 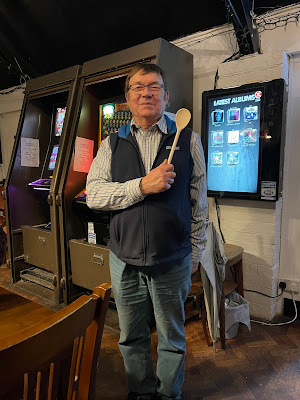 Posted by Kent Sandiford at 03:20 No comments:

Email ThisBlogThis!Share to TwitterShare to FacebookShare to Pinterest
Labels: Mar 2022

Twelve members gathered for our wine tasting evening on the 1st February. Chris and Graham B introduced their favourite red and white wines from South America, Australia and England. Each member was asked to mark (out of 5) each wine for colour, bouquet and taste.

After much discussion and quite lot of sipping, the Wine Club’s members voted a 2021 red wine from Argentina (Jam Shed, a Malbec, £7.00 from Sainsburys, but £6.00 from Morrisons) as their favourite wine, selected by Graham.
This grape is sourced from selected vineyards in the hills of Argentina’s famous Mendoza wine region. This Malbec has rich, opulent plum and blackberry flavours, rounded off with a hint of cocoa and vanilla and is, I quote, “Seriously Shareable, Seriously Delicious, Seriously… give it a go”.

Many thanks to Chris and Graham for sharing their favourite wines.

Our next meeting on Tuesday, 1st March will be a skittles evening at the Royal British Legion in Limpsfield with food included.
Posted by Kent Sandiford at 07:21 No comments:

Email ThisBlogThis!Share to TwitterShare to FacebookShare to Pinterest
Labels: Feb 2022

Twenty members of the Wine Club met on 11th January at the Haycutter, Hurst Green, for a New Year dinner. In January 2021, we were not able to meet because of Covid restrictions, so it was particularly enjoyable to meet this year. To provide some protection, we all did a lateral flow test before meeting at the pub.

The Haycutter provided a very imaginative menu. The consensus was that the food, ambience, and service were all excellent. A roaring log fire kept us all very warm. Many thanks to Janet and Graham for organising the dinner, and also providing some transport.

The next meeting is on Tuesday 1st February, and is a wine-tasting of members’ favourite wines. Please contact Janet (Ph 01737 822333) for further details. 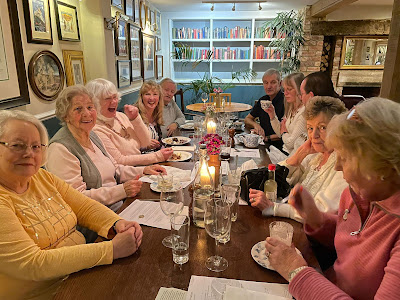 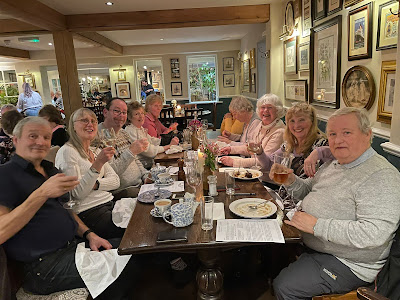 Posted by Kent Sandiford at 01:33 No comments: